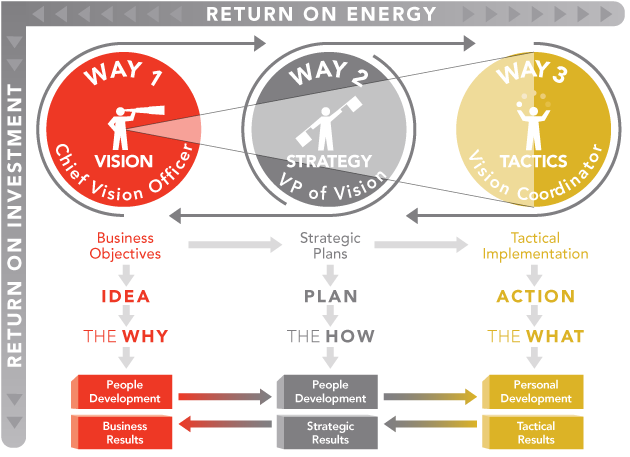 The precarious economy, declining sales, stunted profits and the overall frustrated state of business demands a new Way of thinking and communicating. In Good to Great, Jim Collins posits that the number one problem of struggling companies is putting the right people in the right seats on the bus.

R. Michael Rose realized that it’s not just having the wrong people in the wrong seats. It’s that they are also communicating and thinking the wrong way.

Along with this realization came a solution involving three simple words: Return on Energy®.
Return on Energy, or ROE™, is a methodology developed to get the right people into the right seats to maximize an organization’s success, or Return on Investment. What few people realize is that there are three distinct roles in every successful organization, and these roles are determined by “Ways” of thinking:

ROE™ is just as important as ROI. The causal relationship between the two is a positive feedback loop: as one increases, so does the other. In fact, ROE Powers ROI®.

ROE Powers ROI is a new and important contribution to business and management literature.  It lays out a compelling vision for how a CEO can get the best and most collaborative outcomes from the management team.